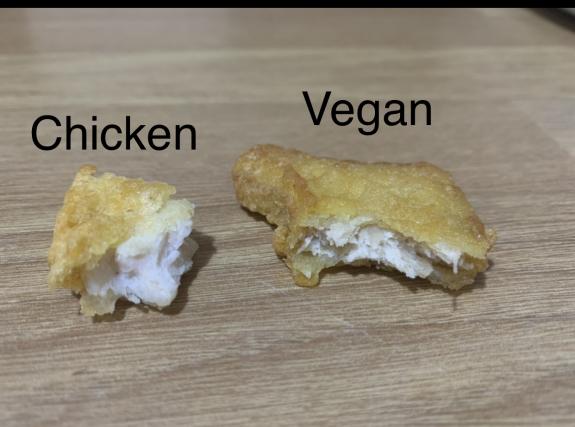 A VEGAN was left feeling “sick” after taking a bite into a chicken nugget which she first believed was vegan.

Bournemouth resident Lianna Hutchins placed a £45 order for her family at Burger King in Castle Lane East on Friday, October 14.

Miss Hutchins said she has been a vegetarian all her life and has been vegan for the past three years but was left “almost in tears” when she took a bite out of a nugget which she believed to be vegan – but was in fact chicken.

Vegan nugget next to the chicken nugget (Image: Lianna)

She said: “When I ate it and realised, it made me feel sick. I was nearly in tears. I have health issues as well, so I don’t want to be putting meat in my body.

“I noticed the smell and texture was definitely different to a vegan nugget.

“I chewed on the nugget and I thought to myself this doesn’t taste vegan. I couldn’t believe it; with Natasha’s Law you’d think everybody would be trained and be aware of food allergies.

“I contacted the restaurant and the manager was very dismissive. He put me on the phone with the man who packed my order. He told me to go to the head office.

Miss Hutchins said the same thing had happened to her mum and dad back in the nineties, and that they had received a lot of compensation for it.

Lianna with her partner (Image: Lianna)

She added the branch had not taken what had happened seriously, and that her family meal, which saw relatives visiting her house, had been “ruined” as she had to take herself away and report it on the phone upstairs.

A spokesperson for Burger King said: “Burger King UK acknowledges the customer’s concern and apologises for the impact this has caused.

“After further investigation, we believe all the appropriate steps were taken, and there were no signs of cross-contamination.

“We will be reaching out to the customer to provide assistance and will be working to ensure all necessary measures and staff training are reinforced.”