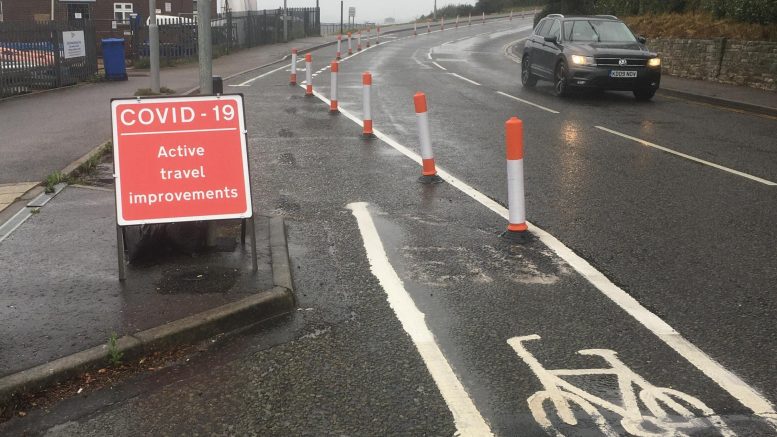 CIVIC leaders have said a trial cycle lane in Poole is “already proving to be popular” for residents travelling by bike.

The introduction of the designated lane along Shore Road towards Sandbanks was one of the first schemes introduced through the emergency active travel fund.

Around 240 metres of flexible bollards were installed to separate and protect bike users from motor traffic, and also discourage cycling on the pavement, providing a safer route for all.

The council also hopes it will encourage more people to swap their cars for pedal power.

“Whilst we are still in the early stages of the six month experimental trial at Evening Hill, the temporary changes are already proving to be popular amongst residents travelling by bike,” said Cllr Hadley.

“Over the one week period of collecting data we saw an impressive 2,554 people using the new cycle lane. Despite the variable weather conditions during that week, including a Saturday with heavy rainfall, it is very promising to see so many people choosing to travel by bike using the new space.

“On days that the cycle lane was not heavily used, we also saw that Sandbanks carpark usage was low.”

The data collected by the council on Evening Hill for the week commencing July 23 was as follows:

When the trial was announced cycling and watersports communities clashed over the project, while some residents spoke of their disappointment as the cycle lane led to the loss of parking spaces in Shore Road.

“We are committed to creating vibrant communities with outstanding quality of life where everyone plays an active role,” said Cllr Hadley. “We recognise that this has displaced some general parking spaces, but there are many still available around Shore Road which have fantastic views over the harbour and Brownsea Island, and given protected space, cyclists are leaving the pavement clear for pedestrians.

“As we have stressed with all the emergency active travel measures the temporary scheme at Evening Hill is part of an experiment where everyone can take part and have their say before a decision is made on whether to make the scheme permanent.

“I would ask that people give the scheme at Evening Hill a chance to bed in and have their say based on first hand experienced rather than pre-conceived ideas.”

The new deal has led to widespread changes to the Wetherspoon drink menu, which includes a number of omissions. Bournemouth Echo | What’s On …