A DEVELOPER is “testing the water” over whether council planners would allow the landmark Barclays House building in Poole to be demolished.

Poole-based Fortitudo is exploring the option of a complete redevelopment of the town centre site, which is being vacated by the bank by the end of the year.

Barclays has instructed the sale of the property on an unconditional basis and it is currently on the market.

The future use of the existing building or any redevelopment proposals would be down to its new owner and BCP Council as the planning authority.

Richard Carr, chief executive of Fortitudo, said his firm had submitted an application to the council for prior approval for demolition of Barclays House in Wimborne Road.

Mr Carr said Fortitudo was interested in making a bid and acquiring the site but only if it had certainty over being able to flatten the existing building and provide a new complex on the land.

“We have not acquired the site but we are testing the water with the local authority as to what their view is,” said Mr Carr.

“Most developers would not do it this way but we are entrepreneurial in our approach.

“We are testing the market to see what interest is out there.

“Quite clearly, I don’t think from an economical sense that it can be converted. The only way we could go forward with making a bid on it would be if the local authority accepts it being demolished.”

The potential move for the Barclays House site comes at a time when Fortitudo is pressing on with a major £200million development in Bournemouth town centre and flats plans in Parkstone Road, Poole, as well as trying to secure permission to develop multiple sites in Sandbanks.

“We are full steam ahead. We are very busy and we are looking to keep it that way,” added Mr Carr.

Barclays House is up for sale

“When the time comes we will be putting an offer forward but it is a really interesting conundrum that we find ourselves in.

“We have served notice on Barclays and put the application into the council.”

Barclays is in the process of moving most of the bank’s 700 Poole staff to a building in the Lansdowne area of Bournemouth. While other staff would be relocated elsewhere, there will be a net loss of around 50 jobs.

The huge Barclays House office block and multi-storey car park opened in 1976, after a public inquiry and several years of construction.

It employed around 2,500 people at its peak, most of them recruited locally to join the several hundred who moved from London.

In 2016, the bank said it would be carrying out a multi-million-pound refurbishment of Barclays House to create a “fit for purpose” workspace. 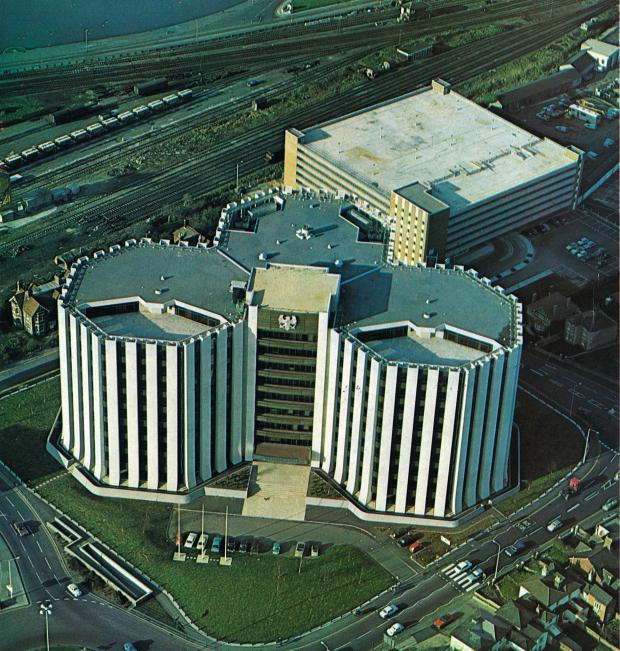 A BCP Council spokesperson said: “We can confirm that we received an application for prior approval notification on March 31, 2022 for Barclays House, Wimborne Road, Poole.

“Following normal procedure, we now have 28 days to respond from the date the application is made valid.”

Stay up to date with all the latest community news across Dorset with our dedicated Facebook group. Click here to find out more and join.