BOURNEMOUTH’S empty House of Fraser store could be on the verge of being sold. 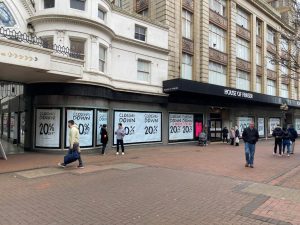 Agents marketing the huge town centre building say it is under offer from a new potential buyer after a previous sale fell through.

Grant Cormack, divisional director for retail and investments at Goadsby in Bournemouth, said: “All I can say at this stage is that the property is still under offer and we hope that the purchase will complete shortly.”

The House of Fraser building on Old Christchurch Road was on the market even before the store closed in March, with offers of at least £4.95million invited.

The building covers more than half an acre, with 83,384sqft of space on six storeys including the basement.

The agents began marketing it in early 2021 as a “prime town centre redevelopment/investment opportunity”.

“Bournemouth is projected to see above average population growth over the period 2019 to 2024. The town’s catchment population is affluent with an over-representation of the most affluent AB and C1 social groups,” they said.

House of Fraser was the town’s last big department store when it closed in March this year. The town had lost Beales in 2020 and Debenhams in 2021.

The shop was the oldest of Bournemouth’s department stores, having been founded in 1871.

The store began life in as Bright’s of Bournemouth, when Frederick Bright opened a shop selling needlework and wool in the Arcade. He expanded the business into neighbouring shops and then an adjacent building.

The building, which has distinctive towers and iron facades, is protected as a grade two listed building.

Earlier this year, a report by the conservation group Save Britain’s Heritage raised concerns about the building.

“it is a bold and expressive building admist its Victorian neighbours,” the report, Departing Stores: Emporia at Risk, by Harriett Lloyd, said.

“However, the structure is in a state of considerable neglect, with leaks and crumbling walls inside and plant growth and rusting casement windows detracting from the outside.”