THESE pictures show the shocking extent of damage caused after a fire ripped through a Bournemouth post office.

Five fire crews from across Bournemouth and Christchurch were called to the Bradpole Road post office at 4.22am on Saturday, April 17.

A neighbouring resident to the store said “people could have been killed” as the blaze took hold of the rear of the propety.

A resident on Bradpole Road said that she was woken up in the night to the sound of suspected disturbance on their drive and then noticed the flames in the reflection of windows on the house opposite them.

She said: “We live in number six and we have a skip outside our house as we are doing some renovation work.

“My husband woke up at 4am because he thought he heard someone rooting around in our skip.

“I initially thought it was then house opposite us that was on fire, but it was the post office down the road. You could smell the smoke instantly.”

Having located the fire, the neighbour called the fire service and notified neighbours to evacuate their homes as the fire began to take hold of the property.

She added: “I started waking up all the neighbours because if the fire had spread to the chip shop with the oil they have there, it could have been very bad.

“It all happened so quickly. The fire engines also turned up really quickly. 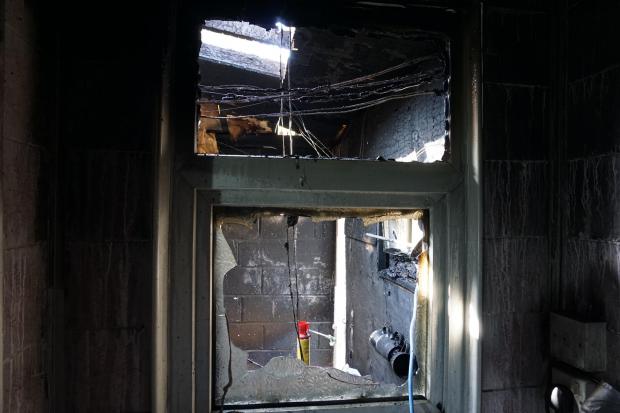 The fire spread quickly through the back of building, destroying the contents of two storage rooms, an office space and staff toilet.

It has also caused extensive smoke damage to the flat above the convenience store but, was it not for the fire-resistant ceilings in the shop, the dwelling could have gone up in flames too.

The owner, who doesn’t want to be named, said: “We had a shop refit in 2016 and they installed top-grade fire-resistant ceiling panels which clearly stopped the fire spreading further.

“The emotional shock from it has been tough, but I am trying to stay strong for my family. The financial loss is unclear at the moment, but thousands of pounds of damage have been caused.

“Because this happened on the weekend, the insurance companies and Best One weren’t open. So yesterday and today, I have been on the phone nonstop to try and sort something out.

“They need to come around and do assessments on the property, which will take time.”

Following the fire damage, the owner of the convenience store has said the support of the community has been “invaluable”, with residents offering financial support, as well as food and supplies to the store.

He added: “Thank you for the community for their support and help during this time, and their willingness to help rebuild the shop. They have been bringing over food and teas and coffees and just checking if I am OK.

“Until now, we didn’t know how much of the community relied on us, but also how kind our neighbours are and how much they want to help. This is a time to come together.

“If it is a community shop, we can rebuild it, but it will take time. I am still getting over the emotional shock of it all.”