THERE are so many unusual but cool things around Dorset.

You can visit the ghost village of Tyneham, snack on a Dorset Knob or take part in Dorset Knob throwing, check out the Cerne Abbas giant or go to the Bridport Hat Festival.

But one sight in particular raises some eyebrows and a few smiles.

The sign, which simply states ‘Bypassed Chinese take-away’, is one of fascination from locals, tourists and curious people online.

Every so often a simple photo of the sign shared on social media leads to it going viral, with many people pondering how the sign came about, why it’s even there and asking where it is.

But the sign leads you to a very popular Chinese takeaway which is ‘hidden’ from view.

The ‘Bypassed Chinese take-away’ sign in Littlemoor area of Weymouth has attracted a lot of attention over the years. Picture: Dorset Echo/Michael Taylor

The sign is based along A353, near for the junction for Chelwood Close in the Littlemoor area of Weymouth.

The sign directs motorists on A353 to turn right into the junction and follow Littlemoor Road, which runs parallel to the A353.

The sign will lead you to Golden Flame takeaway, which is based next to a veterinary surgery.

A spokeswoman for the Golden Flame revealed that the sign was installed after the business was concerned that customers were unable to find it.

She explained that a hill on the grass verge blocked the takeaway from view by drivers and the owner asked the then-Dorset County Council if something could be done to make people aware of the takeaway’s location.

The owner of the takeaway said: “People were not able to see it or find our takeaway. So Dorset County Council gave me a sign to help my business.

“We have been here for many years. Dorset County Council knew about this shop and local customers could not find it.

“When the Olympics was held in 2012, there was a hill along Littlemoor Road and some people on holiday were unable to find us as it was blocking the view.

“So we asked the Dorset County Council to help me to get signage to help people find us.”

Reviews online describe the takeaway as ‘hidden’ or ‘tucked away’, and it’s easy to see why.

The hill, which has become overgrown with vegetation and flowers, completely obscures the takeaway from view and can cause some confusion.

Reflecting on the signage, she described it as a ‘really nice thing to do’ by the council.

‘Dorset is an odd place’ – The sign’s popularity 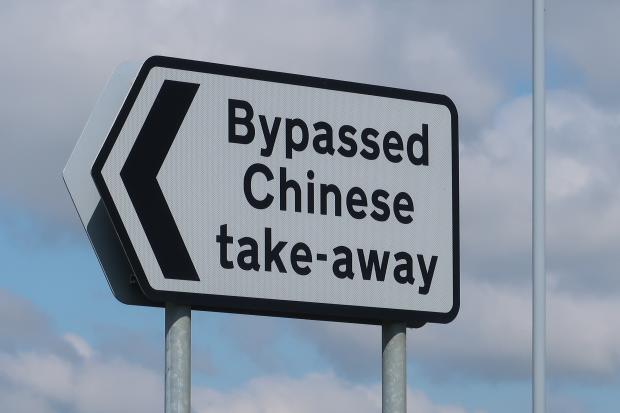 Professor Dan Hicks, professor of Contemporary Archaeology at University of Oxford, once shared a photo of the signage and quipped: “Just imagine the paperwork that lies behind this sign”.

Another person once tweeted: “Dorset is an odd place”.

Reviews about Golden Flame even reference the takeaway’s unqiue location and how the sign helps guide them there.

Just imagine the paperwork that lies behind this sign pic.twitter.com/jRznLFEHQW

One review reads: “Found this takeaway by chance, what a find, food was excellent.

“Staff friendly and helpful, we were all very full after our takeaway banquet!”

Another user wrote: “It’s sad it’s been knocked off of the main road I hope they still receive a lot of business!”