YELLOW Buses is expecting its services to expand as the government requires councils to “dramatically improve bus speeds to the detriment of car traffic”.

In its latest accounts for the year ending March 2021, Bournemouth Transport Limited revealed a pre-tax profit of £591,000 – after a £2.6million loss in the previous 15-month period.

Managing director David Squire said government’s National Bus Strategy (NBS), to be introduced next year, would require councils to oversee a “seismic shift in the travelling public, moving from cars to buses”.

Tickets will be transferable between bus operators and Mr Squire reported that “local authorities will have to deliver (for the first time ever) meaningful bus priority in order to dramatically improve bus speeds to the detriment of car traffic through significant bus priority measures”.

He added: “Making bus services punctual and reliable is the overall aim of the NSB, in order to generate a seismic shift in the travelling public, moving them from cars to buses. Operators are likely to be compensated for running services for the local authority in this new manner by a yet unknown funding mechanism.”

Councils and operators who do not follow the strategy will see their funding stopped or reduced, he said.

BCP Council has formed a partnership with bus operators and is due to submit its Bus Service Improvement Plan (BSIP) to government by the end of this month.

Redevelopment of Boscombe, Royal Bournemouth Hospital, Wessex Fields and the Aviation Business Park, along with a planned leisure attraction near the airport, would all add to the bus network in 2022-23.

Yellow Buses’ turnover fell 18 per cent to £15.6m in the year of Covid, but it received government support designed to outweigh the loss in revenue.

The business lost the contract to run the 035 National Express service between London and Dorset after the coach company took it in-house. But it won a contract to run a similar service for Megabus, as well as a sightseeing service for Golden Tours.

It also hit on a new income stream by servicing other companies’ vehicles at its Mallard Road engineering works.

Mr Squire told the Daily Echo: “I’d like to pay a complete tribute to our workforce who have had a lot thrown at them in the past 12 months, principally with Covid, but everyone’s worked together and one of the benefits of being an SME (small or medium sized enterprise) rather than part of a big group is you get more camaraderie.

“Everybody knows they’re in this together We’ve had coach drivers driving buses and bus drivers driving coaches but everyone’s worked very well indeed and we’ve got to a situation which sees us well fit for the future.” 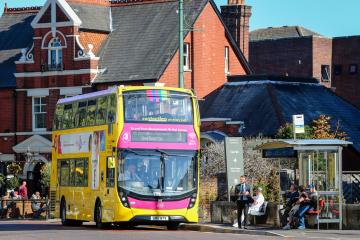